This is another draft of my SNLT script, substantially different in content than the last script. I must thank previous commentators on the last draft. Their input was really helpful in me forming my thoughts about what I wanted to get across in this script. I have swapped the order of this video with the one on contradictions (the draft of which I posted yesterday). I am hoping to get some good feedback on both drafts before starting production. 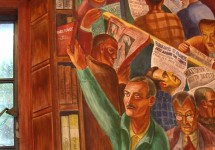 Alone on his tropical island Robinson Crusoe can take as long as he wants to build a cabin for himself. It’s up to him. We don’t have that luxury when we produce for market exchange. When Wonder Bread makes bread they are competing in the market against Pepperidge Farm, Arnold and White Rose. If their workers are less productive, if they take longer to make bread, that doesn’t mean they can sell their bread for more money. The social value of bread is not set by individuals but by the average amount of time it takes to produce bread. This is called the “Socially Necessary Labor Time”. (SNLT)

In neo-classical economic theory there are all sorts of concepts that, though mathematically elegant on paper, have very little descriptive power in the real world. When was a capitalist society ever in General Equillibrium? When was there ever Pareto Optimality? When did consumers ever measure their desires in utils?

SNLT is not like that. SNLT is something very real that we can observe at work everyday. The private labor that goes on behind factory doors will not know for sure what its social value is until the products of that labor enter the market to be compared to the products of other workers. In the market these private labors become social. Socially necessary labor time is asserted. This SNLT then acts back upon production. It disciplines what goes on in the factory. Factories that were spending more labor than was socially necessary are considered inefficient. They must change their production methods or else go out of business. Factories that were producing under the socially necessary time, that were more efficient than average, are rewarded.

Let’s say that the average television takes 1 hour to make. 1 hour is the SNLT for television. But the owner of the ACME TV factory invests in some fancy new machines that make his workers twice as productive. They can now make a television in 30 minutes. They are producing way below the SNLT. This allows ACME to produce twice as many televisions in the same amount of time.

Now if ACME sold their new TV at half the old price they wouldn’t make any more money than before and there would have been no point in investing in all that new stuff. Rather than sell them at their individual value (30 minutes) they continue to sell them at the SNLT (1 hour), or perhaps just under the SNLT in order to out-sell their rivals. Because the price of TVs hasn’t changed significantly there is still the same demand from consumers for TVs, but now there is a giant surplus of TVs on the market because ACME has been making twice as many TVs. ACME’s rivals won’t be able to sell all of their TVs. Part of their product will go unsold. Meanwhile ACME will sell most of their TVs at the SNLT, making not just their normal profit, but an additional “super-profit” because they sold their TVs above their individual values by selling at or near the SNLT.

Profit comes from exploiting workers. The only way to turn money into more money is to invest it in workers, or to be precise, in labor power, the only commodity which can produce more value than it costs. (This is all covered in the video “Law of Value 5: Contradictions”.) When ACME sells TVs at under the SNLT they don’t just reap their normal profits from exploiting workers. They also get super-profits: profit appropriated in exchange because their TVs are made at under the SNLT.

It is this race for super-profits that drives much of the technological dynamism of a capitalist society as capitalists compete to constantly lower SNLT. By doing so capitalists don’t just exploit value from workers. They also appropriate value in exchange.

A superficial look at the ACME TV factory might give one the impression that ACME is making more profit because they are creating more value. But this is not the case. The same amount of workers are doing the same amount of work as before. The same amount of labor time is being performed, spread out over a greater number of commodities. Thus the amount of value they create is not increasing merely because the physical output is increasing. It is extremely important to understand this difference between physical productivity and value productivity. As it becomes easier to make TVs their prices fall. Thus, just because we can make more of something doesn’t mean we have created more value. If other firms were to adopt technology similar to ACME’s we would see the SNLT of TVs fall to half of its former value and ACME’s super-profits would disappear.

At first glance it appears to come from the consumers that buy the commodities. But these consumers are buying a commodity at its value, at the SNLT. They are not losing value in exchange. They pay $50 for a TV and they get a TV worth $50. The people that do lose value are all of the other capitalists who are still producing at the SNLT. They are not able to sell all of their product. They lose out. ACME is able to lure more consumers away from them.

Exchange is a zero-sum game. Whenever one person wins another must lose. There are only so many people willing to buy TVs at the SNLT. When ACME appropriates value in exchange this doesn’t mean that they are stealing money from the coffers of their competitors. It means that they are filching away sales from their rivals. More value comes to ACME than it actually created, less goes to its rivals. (1)

SNLT and the Labor Process

This process goes on everyday in a capitalist society. We have an obsession with time and efficiency. Everything from the working day, to the motions of workers are timed and rationalized. From the moment the alarm clock rings you are checking train schedules, punching time cards, and working as efficiently as possible. There is an entire field of industrial engineering which is devoted to decreasing SNLT in society. Some of the most influential minds of the last century have been people like Henry Ford and Frederick Taylor who made substantial contributions to the reduction of SNLT, all in the quest for a super-profit.

This drive to produce a super-profit does not mean that less and less labor is happening in society. It means that the same amount of labor is producing more output. We are often told that machines will make life easier, reducing the need for work. But this has never been the case in a capitalist society. Machines just create more output per hour worked. Often times machines are used to get more work out of workers because the machine can dictate the pace and intensity of work to the worker. SNLT is a force that presses down upon us, disciplining our motions, driving us to produce value merely for the sake of producing value, rewarding us when we can produce above the average productivity and punishing us when we fall behind.

SNLT and the centralization and concentration of capital

Capitalists compete to lower the SNLT by investing in fancier equipment. The better the machines the more efficient the labor process the higher the output the lower the prices the more super-profit the more money available to invest in new machines… Competition for SNLT means that more and more equipment is needed in order to stay competitive. This makes it harder and harder for small firms to stay competitive. The size of the firm gets larger and larger and the amount of firms in an industry shrinks. The winners gobble up the losers and capital is consolidated into fewer and fewer hands. If firms become powerful enough they may even take measures to blunt competition so that nobody can produce more efficiently than them.

This means that workers in such a society would still have to discipline their actions to the social average. Cooperatives that worked at under the SNLT would appropriate value in exchange. Cooperatives would compete to modernize their equipment so as to lower the SNLT. And how would co-ops obtain the money to invest in better, labor-saving equipment? They would have to exploit themselves. That is, the more money that workers want to plow back into making their labor competitive, they less they can pay themselves. Not only would the workers be disciplined by SNLT, they would also find themselves disciplined by the need to amass surplus value so as to stay competitive.

Production of surplus-value for its own sake, fierce competition over super-profits, the disciplining of the labor process to the whims of impersonal market forces… sound familiar? Now perhaps one might be of the opinion that it is impossible to do away with SNLT, with market coordination. If this is the case then our best option is do debate what type of market socialism would be least exploitative, least alienating. But why not challenge ourselves to imagine a world without these things.

What would it mean to create a society without surplus value, SNLT or super-profits?

No SNLT means that the products of labor don’t meet in the market as commodities with values. In other words, if we challenge ourselves to imagine a world without SNLT then we must begin to think about a world without value production- a world where the labor process is not coordinated by market exchange. Obviously there are a lot of different ideas about how such a world might be organized. This is not the place to evaluate all of those ideas. Rather, here we should realize that Marx’s theory of value is a powerful tool not just for critiquing capitalism as we know it, but also of helping us evaluate proposals to change the world. That doesn’t mean that Marx’s theory of value has all of the answers for those who want to change the world. But it is incredibly useful in helping us understand the complexity of the task, the consequences of our actions, and the possibilities that might lie before us.

Our private labor doesn’t immediately become social. It must become value in order to be social. But in becoming value it is disciplined by socially necessary labor time. SNLT acts as an external force which disciplines our private labor, constantly compelling us to work more efficiently, yet never actually making our work easier or more fulfilling. SNLT creates the possibility for super-profits when one produces under the SNLT.

In a society not producing for competition or capital, but for communal ownership, there would not be a SNLT. The engineer-worker would be free to design their labor time anyway they wanted, without the external compulsion to maximize output per labor time. There would still be an incentive to increase efficiency, but it would not be an external compulsion to increase efficiency at the expense of the worker. A job would cease to be a job- that is, a passionless series of motions we are compelled to carry out in order to eek out a living in the market. Work could become something much more deep and fulfilling, a means of self-discovery and expression, and a means of establishing social bonds. A radically different notion of work would mean a radically different world.